...as long as you don't count all the WIPs hanging around on the floor in my sewing room :)

The only WIP that I touched this week was the Kindergarten quilt. I managed to convince myself that lying on the couch after the children had completely sapped all my lifeforce wasn't actually going to get that quilt finished (and there is a deadline approaching!), so I stitched up a little dedication, but decided to forgo the embroidered flowers (in the spirit of getting things finished and all). 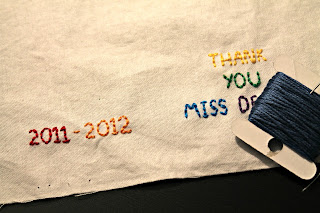 I also decided to stick to appliqué for the rest of the block, I had thought about doing a paper pieced house and heart, but wanted the last block to blend in with the children's blocks. I made a simple little house filled with hearts, made with treasured scraps of Ruby Star Rising Ephemera. 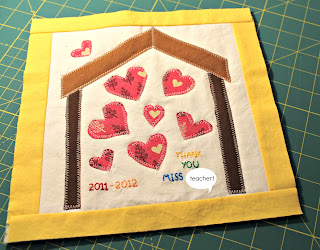 I got most of the blocks put together last night, until I accidentally spilled a drink on one of the blocks, gasp! Who knew that you shouldn't place liquids next to your sewing machine? Thank goodness it was colourless. So I gently rinsed the block out and had to wait for it to dry to finish the top. I went to finish the top this morning, when my sewing machine, which was perfectly happy last night (not touched by the spill at all), started having major issues - I think it's a timing thing. Fortunately I still have a backup. Okay, two. 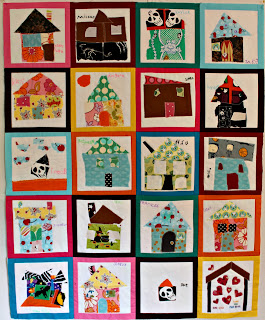 (I don't know why every picture I take of this quilt looks out of focus...)

Now it just needs basting, quilting and binding. The Reunion Years print is for the backing, and the little Xs (forget what line they are from) are for the binding. Should be done soon! 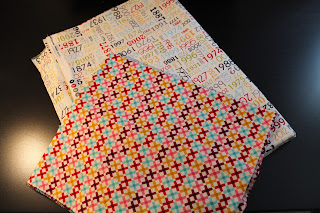 And, yay, this week there were FOs! (Yes, that means I ignored a bunch of WIPs to start something new - but I finished them, so it doesn't count, hah!) I have had this Amy Butler Barcelona skirt pattern on the agenda, with this Brooklyn Heights fabric, forever! As I was cutting out the pieces I realized that instead of shortening the pieces I could just leave the bottom section off - I am too short for such a long a-line skirt. I also took in the flare by about 11/2" each side (6" total) and am really happy with the shape. 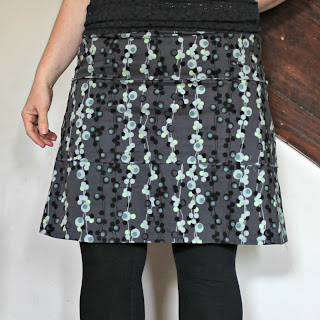 While I was clicking around the internets, I discovered that this is Skirt Week at Crafterhours! So I am entering this in the A-line category, if you have whipped up some skirts recently, then run on over and enter! You have until June 8th.

I also picked up some knit dresses at the thrift store to make into yoga skirts for the summer, and this is the first one. It was originally a maxi dress from old navy, and now it will be my summer-hanging-out-at-the-park skirt, super comfy. I used the super easy tutorial from stayathomeartist. My daughter saw it and immediately demanded to have an identical skirt. Hmmm. 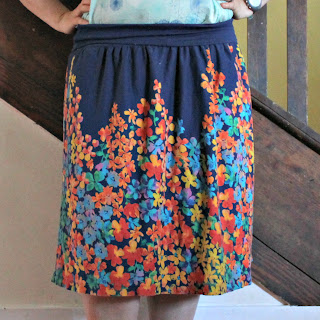 (Until now, I had not experienced the torture of trying to take a decent picture of yourself!)

And speaking of small tyrants, I finished this Ice Cream Dress last week - at the request of the previously mentioned small tyrant, with fabrics picked with her very own little hands - and every time I go near her with it she shrieks and runs away. I think the problem is that the button isn't shiny enough? You think that girl in The Devil Wears Prada had it rough, I would take her job in a second! 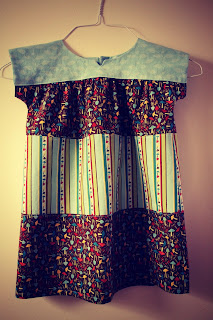 (This button, apparently, is not shiny enough.)

And the other small tyrant proclaimed that I also need to make a fish for the shark to eat on the pirate quilt. Yes, sir, I will get right on that.

FOs seem to be outweighing WIPs this week, but I guess that's a good thing!

I am linking up with WIP Wednesday at Freshly Pieced and at The Needle and Thread Network. There are sooo many fantastic blogs on both these sites if you want to check them out.

I'm sure you've listened to enough from me by now, so I will save my other exciting news for the next post.

Thanks for visiting, and have a lovely Wednesday!
Posted by Chez Roo at 1:22 PM